A meeting of the Panj Singh Sahib held at the Secretariat of Sri Akal Takhat Sahib, Amritsar on 27 January 2014 agreed for the Sikh Council UK to work to resolve matters concerning UK Sikhs.

The decision, issued in the form of an Adesh (order) requires Sikh Council UK, in carrying out this work, to consult with UK religious Jathebandian (organisations) and Gurdwara Committees and to inform and take permission of Sri Akal Takhat Sahib.

Secretary General of the Sikh Council UK, Gurmel Singh said, “The decision of the Panj Singh Sahib for Sikh Council UK to lead on matters concerning UK Sikhs came as a surprise and is very humbling. Whilst the decision is welcome we will now need to consider how we implement the Adesh and how we improve communication between UK Sikhs and Sri Akal Takhat Sahib.”

Spokesperson of the Sikh Council UK, Kulwant Singh Dhesi said, “This historic announcement is the first time the Panj Singh Sahib have given such a decision in relation to any organisation in any country. Whilst this reflects the progress made by the Sikh Council UK in such a short time it is also a welcome recognition of the role and contribution of Sikhs in the diaspora.”

He added, “Sikhs in the UK and across the world have always respected and worked in accordance with our traditional Jathedar systems but in recent years have sought recognition of the large Sikh diaspora. This is a welcome first step in accommodating and integrating Sikhs outside of India into our central authorities. We will continue supporting our traditional structures, particularly the supremacy of Sri Akal Takhat Sahib, whilst working within them in this new way for the benefit of the entire community.”

Notes for Editors
The written Adesh (order) of the Panj Singh Sahib is attached. As this is in Punjabi, an English translation is below:
“5 Singh Sahiban met at the Akal Takhat Secretariat on 27 Jan 2014. After deliberation it was resolved that the religious organisation set up by the congregation of the UK the “Sikh Council UK” should use appropriate efforts / endeavours to resolve all the UK’s religious and community issues having consulted all religious Jathebandian and Gurdwara committees and inform and take permission from the Akal Takhat before reaching the final form.”
Final form means final conclusions / resolutions etc. 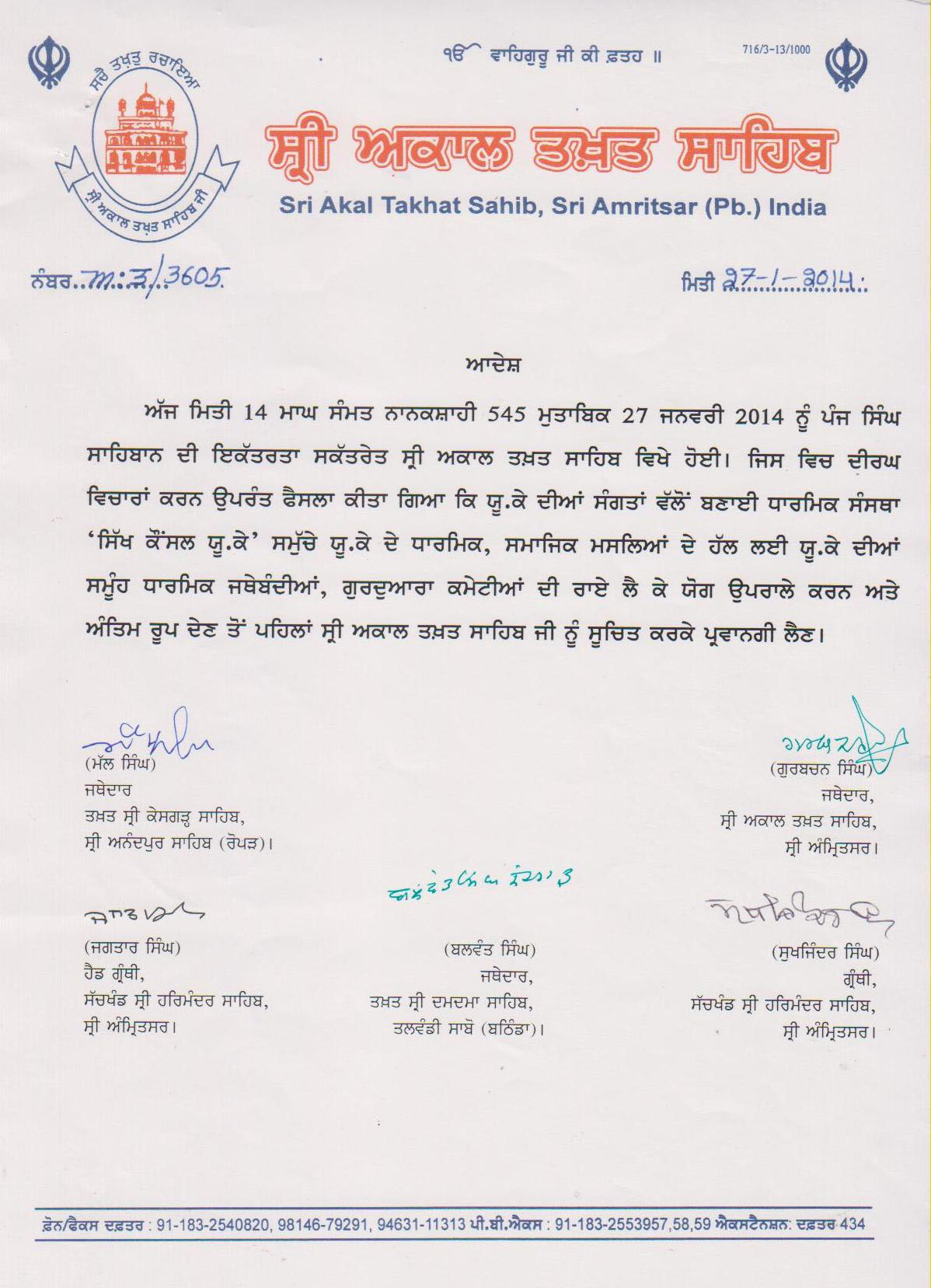